How to install an alternator:

The originally fitted DC-dynamo is a very heavy item, and has very low efficiency compared to the modern alternator. Not only does the alternator have a higher output, but it's produced across a wider range of engine speed, including a very low tickover. There are several products to chose from, but the lightest and most effective is used in Japanese cars (e.g. Toyota, Mazda or Daihatsu). The brand is NipponDenso and the lightest I have found comes from a Daihatsu Charade 1.0 1991. This is identical to the "45A race alternator" from Edge Performance, having twice the output and half of the weight compared to the original dynamo. 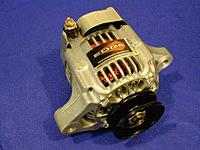 I modified a V-shape pulley from an old Lucas alternator to get the pulleys in line and I had to make a special bracket for the mounting.

About the first thing to say about the process of converting from dynamo to alternator is that unless it has already been done you almost certainly will have to convert from positive ground to negative ground.
The wiring is the conventional 3 wire configuration with switched ignition (I), charge warning light (L) and main output post to battery (+).

Some altenators has an additional terminal - Sense, to compensate for the voltage drop in the wiring. This wire is connected directly to the battery.

Installed in the car: 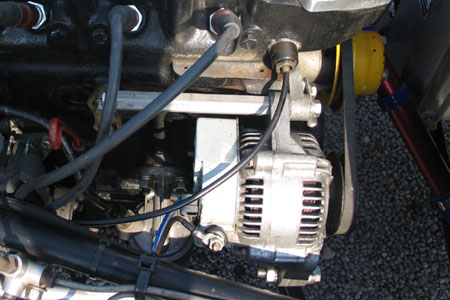 Some prefer to use the Toyota alternator, which is more widely available.
See here for wiring diagram.