How to install an electric cooling fan: 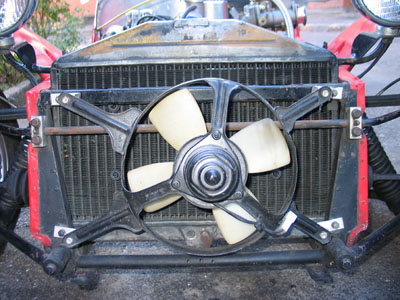 Old fan in front of the radiator

I have seen numerous examples of how to wire an electric cooling fan on the Internet, but none was of my liking. A functional solution will include automatic control by a thermostat in cooling system combined with a manual override switch placed at the dashboard. To avoid unpredicted start the automatic control should only function with the engine running (ignition on), whilst the manual override should work at anytime, to allow forced "cool down" when the engine is stopped.

One of drawbacks of the examples I have seen is that the thermostat is controlling the fan motor directly without a relay. Thermostatic switches are known to fail - in most cases due to the relatively high current running thru contact points. Protecting the thermostat with a relay will be a more reliable solution.

The control could be equipped with a warning light. But not directly over the motor terminals as the fan could work like a windmill powering the light while driving. The warning light should work both when the automatic or the manual override is in function.

The wires for the fan should be of proper gauge - 2.5mm² are appropriate in most cases. The heavy current would cause a voltage drop in the cable. Even if this were only 10% (one volt say) the fan speed will drop by 20% compared to its normal top speed. (because fan speed is proportional to power applied and power is proportional to volts squared). Further, the force (pressure) at which the "fanned" air will be delivered to the radiator is proportional to fan speed squared. So based on the figures above, the air delivered may be down to less than 65% of its norm.
The other wiring can be done in a relatively small gauge. For the override I have used a good quality SPDT switch (Farnell no: 108-2326)

If the fan isn't already installed, the first task is to fit the fan. Some aftermarket fan producers highly recommend placing the fan behind the radiator - pulling the air thru rather than pushing. They are claiming the efficiency is up to 30% higher in pull-mode. Although front mounting is seen in many applications, it makes some sense knowing the fan itself will block some of the air path to the radiator when placed on front. Another word about efficiency - it is important that fan shroud is placed close to the radiator not allowing any "false" air to be managed by the fan.
I have decided to use the 9" PACET PROFAN in the pull version. Having the original radiator in the original position inside the frame leaves not depth enough, and the fan need to be modified, both the shroud and the fixing angles. I used a DREMEL tool to remove the excess material to clear the steering rack.


The quick-fix mounting system through the radiator core has actually proven to be okay, but the very anxious might end up building a metal frame for the mount. Please note if your not ordering the fan as a kit the mounting will not be included and has to be bought separately. 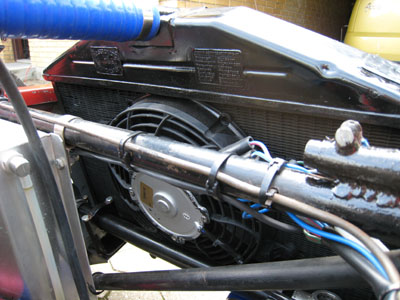 Many installation guides recommend placing the thermostatic switch in the top hose - which gives the fastest response time. Fan kits often include an adjustable thermostat based on a capillary tube, which has to be inserted in the hose with some kind of seal - In my opinion not a very elegant solution. Alternatively there are rather expensive adjustable electronic fan controllers. But I think the best way is to fit a fixed thermostat from a modern car, it might take some time to find the right cut-in temperature, but I think you end up with the lightest and most reliable solution.

FACET is a manufacturer of Thermo Switches, you might be able to find an item with a suitiable range in their catalogue: www.facet.it

These switches are not designed for carrying the high inrush current of the fan - so use a relay as mentioned under the diagram.

The switch is placed in the thermostat housing brought from Burton Power: FP610M 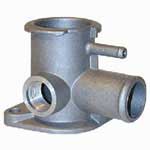 For the BMC A-motor You will need to fabricate an adaptor plate, the housing originally comes from a Ford Fiesta so it will probably fit most Ford engines.

One last thing to remember:
Fans are there to cool the engine whilst at low speed. Fact. Once above 35 mph or so, it's airflow through the radiator that does the cooling. Electric fans only help up to about 30 mph, so fitting one won't cure hot running at speed.