The camber angles at the front looked wrong - or at least not the same in each side. Dismaltling the whole suspension revealed a bended lower wishbone on the left side and bended up-right on the right side.
I decided to go the hard way buying new wishbones from Redline and sourcing a new upright. All bushes will be renewed. Springs and dampers will also be exchanged. The only original parts that remains are the left upright and the anti-roll bar. 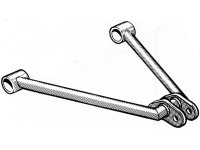 I wanted to have the wishbones chromed. But the new ones was powder-coated, and this is very, very nasty stuff to get off. I tried paint-remover, heat and various solvents. But the only thing that really work was mechanical scraping - though. It virtually took me hours to get it off. Next time I come across a powder coated part - I will have it removed professionally. 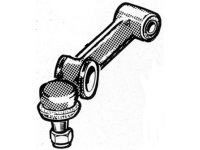 The ball-joint in the top-link was completely ruined in both sides - so new ones was obtained from Redline. The forged top-link is forming the rearward link of the upper A-arm.
For some strange reason the link was marked L for right and R for left. It could have something to do with the parts origin - originally used upside down as the lower track control arm on a Ford Anglia.
But Tony Weale is writing this is a Lotus developed part - odd. 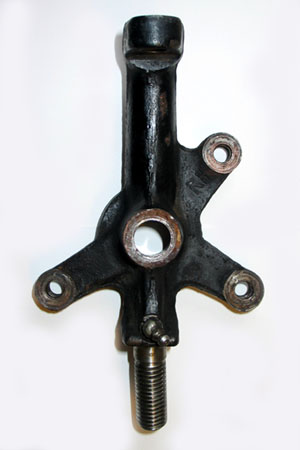 You can barely see it on the photo but the lower thread has a severe bend. I wonder what caused these damages, but the frame seems to be OK. My car has been converted to disc-brakes based on Triumph Spitfire parts, so it was easy to find an replacement.
The upright is similar to the ones used on Caterham where the caliber bracket is "integrated". Unlike the original "Herald" ones where the bracket was a seperate item. Except for the steering arm all other part remain the same.
The recommended lubricant for the swivel is oil (gearoil) not grease.

The tapered bush (Y9) fitted to the front inner mounting of the lower wishbone and the anti roll bar is used on other british sportscars including
MGB (Front Top Trunnion) and Sprite/Midget (Front Lower Inner Wishbone). The Moss part number is: 8G621Z - eight will be required per car.
A similar bush is available in polyurethane (SuperFlex: SPF0282).

The springs and dampers were brought from "AVO performance suspension". The dampers has 22 position adjustable damping rate. And the spring seat can be adjusted up and down on the threaded damper body to correct the ride height. The spring rates are chosen a bit conservative - 200 lbs front and 150 lbs back. 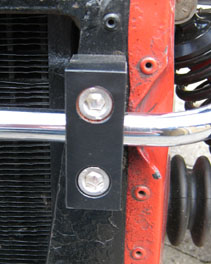 The forward link of the upper A-arm is formed by the anti-roll bar, a typical Chapman technique of making one component serve the purpose of two.

Care must be taken not to fit the roll bar upside down. The correct way is to have the cranked end facing downwards. It will then be parallel to the ground when the car is on normal ride height.

To prevent the original aluminum blocks from damaging the chromed anti-roll bar, I have replaced them with new ones made in oil-filled nylon (NYLATRON).

The mounting blocks must not act as clamps but allow the bar to turn freely without play. The roll bar is best fitted when the car is on wheels. 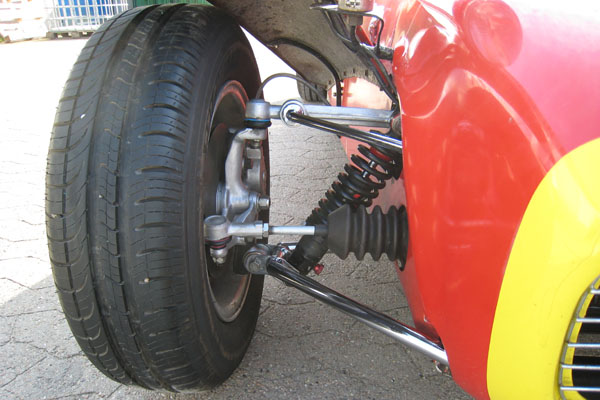 Recommend 75mm for the sump clearance. The rear should be 12-15mm higher than the front.
150mm at front measured from chassis rail where rear arm of lower wishbone is mounted and 15mm more just in front of mounting of rear A-frame.


The only thing that can adjusted is the Toe-in, and the original specification is for diagonal tyres. I have been advised to reduce the Toe-in to 1mm when using radial tyres.

A way (modification) to adjust the camber angle is described here DSK offset trunnion. Again using modern radial tires might require a different setting, DSK suggest that 1/2 degree of negative camber is suitable for street use.