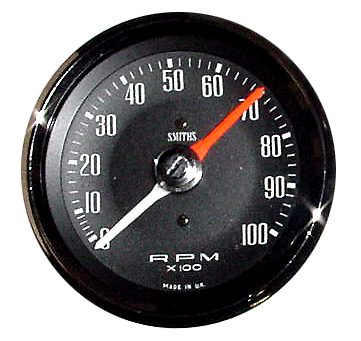 There are two types of tachs. Current sense and voltage sense. In Smiths parlance, RVI and RVC which can be identified by the letters on the face of the tachometer. RVI's are no longer in production, so the letters are deleted from new ones - they are all RVC's.

RVCs are connected in parallel with the contact breakers. RVCs are less susceptible to changes in the ignition circuit. To my knowledge no RVC was fitted to sevens in production. RVC types that take a signal from the negative side of the coil are totally compatible with electronic ignition.
Changed points to electronic ignition. Really the only solution is to rewire and change to an RVC.

Internally both tachos work the same way. As the contact breakers open and close they trigger a bit of circuit called an "Monostable". This produces a pulse of a fixed length on the monostable output for each opening OR closing of the points.
This means that the variably timed ignition (the dwell period) is converted to a series of fixed length pulses. One pulse for each spark. This pulsed output of the monostable is then used to drive the tacho needle mechanism. Each output pulse moves the needle a small amount per second (~0.02 deg./s - 4 cyl) (The meter effectively integrates this signal)
In the RVI a coil of wire in the ignition circuit forms part of a simple transformer that is used to generate a pulse for the input of the monostable. In the RVC the voltage input is taken directly from the points.

Setup:
The tachometer is powered by a bench power supply (13.7 V). The signal input is from a signal generator, using square waves, which are monitored on a Frequency Counter. A single transistor network was used to interface the low level signal from the signal generator to the levels needed for the tachometer (12 Vpp).

For a four cylinder engine running at 3000 rpm, there are two sparks per revolution, so the spark rate is 6000 per minute, or 100 sparks per second. So, with the frequency generator set to 100Hz, the tachometer should read 3000rpm. 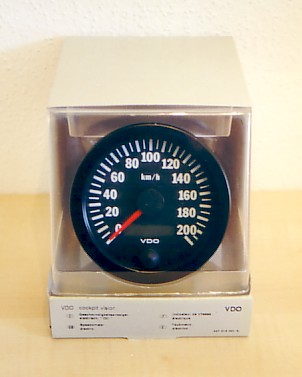 I only use piped and capillary gauges for temps as the response is instant, by the time electric smiths type have responded your engine is cooked!