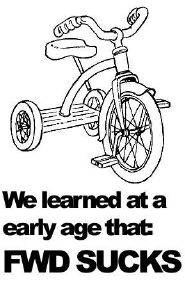 The main weakness of the Seven S2 lay with the Standard 10 axle. The unit is prone to leakage resulting in seized differentials. The problem arise because of the differential housing being prised open under acceleration forces. The location of the axle is constructed in a very simple and light manner. But unfortunately it puts a lot of stress on the axle casing. An A-frame locates the central lower point and 2 radius arms is placed on top near the wheels, causing the axle casing to twist on every acceleration. 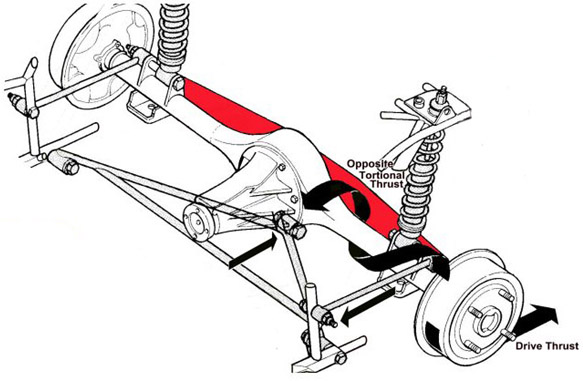 Credit to: www.locost.info for the drawing.

My differential was probably broken due to lack of oil. I discovered several cracks in the casing and some of the bolts holding the differential were loose. The crown wheel and pinion was completely ruined, but I was able get a similar differential from a Triumph Spitfire, although the gearing is 4.11:1 compared to the original 4.55:1. Be aware of the Spitfire is produced with 2 axle dimensions - only the early (smaller) will fit with axles in Standard 10 assembly.
Despite the independent rear suspension on the Triumph Spitfire, the car is a good source for Standard 10 rear axle parts. As mentioned the differential can be exchanged as a whole assembly, provided the gear wheels is splined for the early axles. The hubs, bearings and seals at the wheel end is similar, and can easily be obtained from companies specialized in Triumph Parts.
I brought the outer seals (Part No. GHS111) and a set of wheel studs (Part No. 21H5774) from Moss Europe.
To renew the outer seals you need to remove the hubs from the axles. This can be very, very difficult - now you are warned. Even with right special tool I managed to bend one of the hubs - so it has to be exchanged.

It is essential to use a classic EP (extreme pressure) oil to GL4 (Hypoid/Hopoy) specification only for the differtial; example Castrol EP 90 (GL4)
DO NOT USE GL5. Virtually all oils now sold are to GL5 spec and will "melt" the copper washers in the diff.
Quantity needed 1.5 pint = 0.7 liter.

The "top hat" bushes where A-frame pivots under the differential have a very short life, especially when soaked in oil from a leaking axle. The Moss part number is 88G274 (old number Y16), and this is identical to the front top trunnion bush on a MG Midget.
The bushes need compressing a fair bit to fit within the bracket on the diff case – The way i have found easiest for me is to put the new bushes in the A frame and put the bolt through and do up the nut to squash the bushes flat. With the bolt done swing the A frame up into the braket on the diff. You will be only be able to get it so far as the bolt and nut will stop it naturally but far enough so the bracket on the diff is located on the lugs of the bushes. Keeping the frame up in position undo the bolt and nut and use a jack to gently ease the A-frame up. The next tricky bit is getting everything lined up sufficiently well for the bolt to go all the way through – you’ll need a tapered drift for that, or endless supplies of patience. A smear of brake grease or washing up soap over the bushes eases things considerably.
Do not finally tighten the bolt until the car is on the ground and at normal ride height. This will ensure the rubber bushes are not pre-loaded but are locked in a neutral position. 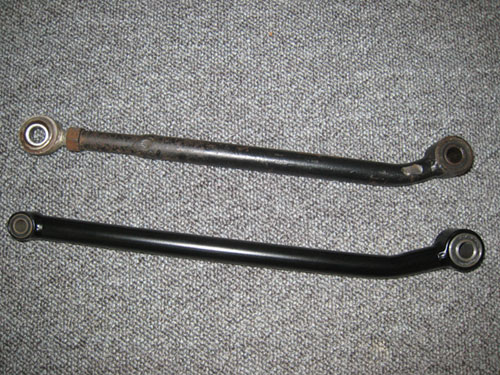 The picture shows the correct way of mounting the radius arms, the small damage near the rubber bush (upper arm) shows what happen if the arm is mounted the other way around. For some reason the radius arms on my car have been rose jointed at the front mount. This allow adjustment and gives a better location of the rear axle, but problably puts more load on the frame.
The bush was stubborn and very difficult to exchange, so I ordered a new set of radius arms at Redline with the correct bushes fitted.