When I brought the car it was fitted with some very "crappy" indicators both at the front and the sides.

Instead of the traditional position below the headlights I have found a neat solution from Stafford Vehicle Components where the indicator is included in "torpedo" side lights (L1130) on the fenders. The amber bulb for the turn light is 21W, and the side light is 5W.

It is working very well. One of the advantages is, that the adjustment for the headlights is more accessible.

The smallest and most discrete side indicators I have found are these cone formed units.
The indicators are mounted in the "triangle" formed by the windscreen support.
I have seen these types used on a Ferrari Enzo so they must be good enough for a Seven. 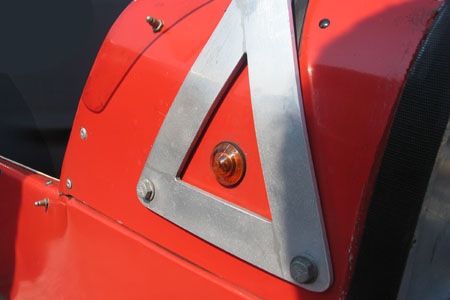 Lucas L539 lights with 3.25" chrome rim. In the future I might change the lenses on the rear indicators from red to orange - although it is legal to have red indicators on a 1962 vintage car.

I have found a nice looking green warning light with symbol from Europa Spares. This is similar to the other warning lights I will put on my new dash board for the High Beam (blue), Ignition (Red) and Fan (Yellow).

The original rear lamp for a pre 1965 S2 is the ultra rare Wingard 1055. My car is fitted with Lucas L549 rear lights. Red Plastic lens with built-in reflector on a chrome base. These where originally used on Austin Healey Sprite, MGA & Triumphs. I think they suit the car very nicely, and will keep them even on the wider wings.